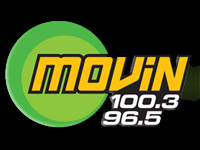 SYRACUSE — There’s a new addition to the weekend lineup at MOViN 100.3/96/5 (WMVN).  Last night was the station’s first as an affiliate of the syndicated “Sunday Nite Slow Jams with R Dub!” show.

If you missed it last night, you can catch it every Sunday from 8pm to midnight.  According to an announcement from the station, the show “features the hottest Rhythmic love songs, along with your dedications.”

Among some of the “Slow Jams that you probably haven’t heard in awhile, and definitely won’t hear anywhere else,” the weekly program says you’ll hear from artists such as “SWV, Keith Sweat, Jodeci, Boyz II Men, Al B. Sure, Janet Jackson and more.”

The program is syndicated by Westwood One.  Elsewhere in the CNYRadio.com coverage area, the show lists Ithaca’s Z95.5 (WFIZ) as an affiliate on Sunday nights.  Some affiliates carry the show on weeknights as well.  As of Monday afternoon, the show’s website hadn’t yet added MOViN’ 100.3/96.5 to its affiliate list.

Host “R Dub!” is based in San Diego, California, where he is the program director and afternoon drive host of Magic 92.5 (XHRM).