WASHINGTON, DC — Are you ready for Syracuse’s “Sweet 16” game against Indiana tonight?  We usually hold “Picture of the Week” until Friday, but given that this week’s photo has to do with the media frenzy surrounding tonight’s game, we decided to move the feature up by a day this week. 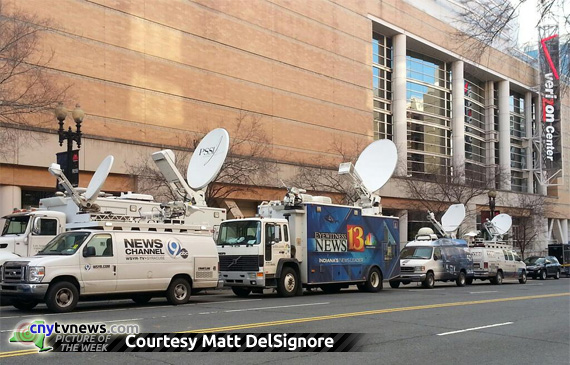 Although the game isn’t until tonight, both teams offered press conferences yesterday as they’ve been preparing for tonight’s match-up.  Some local media outlets have had a presence in Washington for the entire week.

And it’s a small world — we have none other than former Newsradio 570 WSYR anchor/reporter Matt DelSignore to thank for this photo.  As you might recall reading here a little over a year ago, DelSignore now works for Washington DC’s All-News 99.1 WNEW-FM.  When he spotted the interesting arrangement of live trucks, he shared the photo via Twitter:

Our thanks again to Matt DelSignore for sending in this photo!  And if you’re looking for the Orange tonight, here’s where you can watch or listen:

Tip-off is scheduled for 9:45pm, but that’s just an estimate, as the Syracuse/Indiana game follows a 7:15 contest between Marquette and Miami (Fla.) in the same venue.

Every week, we like to share reader-submitted photos of the latest happenings — or notable “blasts from the past” — involving local TV or radio.  It’s easy to be a part of the fun… just email your photos to cnyradio@cnyradio.com or upload through the Contact Form!  Although we broke tradition this week by going a day earlier, there’s usually a new Picture of the Week every Friday at 7:00am.