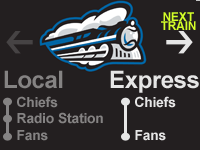 SYRACUSE — Yesterday, we reported that the Syracuse Chiefs have a new radio partner: the Internet.  It’s definitely a notable break from the many years fans could hear the hometown team on traditional broadcast radio.  Even though he knew people would be critical, the team’s GM tells CNYRadio.com there were plenty of factors behind the decision.

For the past two years, the Chiefs, the Triple-A affiliate of the Washington Nationals, have had their games carried by Cumulus Media all-sports station The Score 1260 (WSKO).  Earlier this week, we learned WSKO would no longer be carrying Chiefs games.  Yesterday, we expected news that the Chiefs simply switched to another station — but the team threw a curveball, so to speak, by announcing it’s going to bypass broadcast radio altogether.  Instead, games will be streamed through the new, online-only “Syracuse Chiefs Baseball Network.”  Fans can listen at syracusechiefs.com and through a free smartphone app which will be made available in the coming days.

A wise move?  Will fans willingly follow along, or will the team wind up leaving them in the dust?  The new arrangement will, as Brent Axe bluntly put it on syracuse.com today, make the team look like either “innovators or fools.”  But John Simone, General Manager of the Chiefs, told CNYRadio.com it’s all been in the works for quite some time, and he’s confident it will prove successful.

Speaking with syracuse.com’s Lindsay Kramer on Thursday, Simone mentioned “no signal problems” as an advantage of online streaming.  Today, Simone explained that in more detail.  “The Score 1260 was great to us,” but it wasn’t considered ideal because — like many local AM stations — it’s required to alter its broadcast pattern at night.

According to FCC records, WSKO is authorized to run at 5,000 watts around the clock, but the station must switch to a directional pattern between sunset and sunrise.  The regulation is intended to avoid interference between stations, as AM radio waves can travel further at night.  Although the restricted nighttime pattern might keep WSKO from interfering with faraway stations elsewhere, it also leaves some local listeners without a signal.

“With 85% of my games taking place at night,” Simone explained it’s frustrating when, “you just can’t hear the games in certain parts of Central New York.”

Yesterday, Galaxy Communications President and CEO Ed Levine told CNYRadio.com, “if I had known that the Chiefs were an option, we would have been interested in having a discussion,” perhaps about putting the Chiefs on Galaxy’s ESPN Radio stations, which include AM stations WTLA and WSGO, plus simulcasts on translators 97.7 and 100.1FM.

Today, Simone said he hadn’t considered Galaxy because the Chiefs used WTLA many years ago, and he recalled many times, “you couldn’t get 1200 on in the ballpark.”  FCC records show WTLA broadcasts with 1,000 watts around the clock, but must also switch to a directional pattern after sunset.

While Simone understands the nighttime pattern changes are dictacted by the FCC, not by the stations themselves, he’d still prefer a station that can offer a powerful signal after sunset.  Specifically, he mentioned Clear Channel’s two Syracuse AM stations, 570 WSYR and 620 WHEN.  “If we could still be on 570 or 620, we’d probably still be there,” he said, but neither is an option anymore.  WSYR has carried New York Yankees baseball for the past several seasons.  WHEN used to carry the Chiefs, until Clear Channel flipped WHEN from sports talk to urban adult contemporary.

“All of the radio GMs in the market are great people,” Simone noted.  But without access to an AM signal that can provide a strong night signal, and knowing baseball would be out-of-place on most of the market’s music-dominated FM stations, Simone said team management decided the money previously spent on broadcast air time could be better spent elsewhere.

For the past few years, The Score 1260’s reduced nighttime pattern was, in part, counteracted by a strong lineup of local sports talk programming.  When the Chiefs moved to WSKO in 2011, the station had local hosts in the studio every weekday from 10am to 6pm.  That allowed for some natural value-added synergies, such as having Chiefs players and officials in-studio for interviews… not to mention, a good chance the hosts would naturally talk about the Chiefs anyway, in the course of discussing local sports topics.

But, just since the beginning of the year, that daily 8-hour marathon of local sports talk has fallen to just two hours per day.  In December, longtime afternoon host Brent Axe left for a job at syracuse.com. Earlier this week, Mike Lindsley left WSKO to take a job with the ESPN Radio affiliate in Albany, a larger market than Syracuse.  Rather than finding new local hosts to replace Axe and Lindsley, Cumulus Media opted to fill the midday and afternoon timeslots with nationally-syndicated hosts from the CBS Sports Radio Network.

“Doug Gottlieb isn’t going to tell listeners to ‘stay tuned for the Chiefs pre-game coming up next,'” Simone said of the CBS network host who is now heard on WSKO during afternoon drive.  He also noted syndicated hosts like Gottlieb and Jim Rome won’t be talking about the Chiefs or taking listener calls about the Chiefs as the local hosts had done.

Even Axe took a shot at that decision earlier this week, posting on Facebook: “So, I missed it today. How was Gottlieb’s 3-hour breakdown of SU-Indiana and his interview with new Crunch coach Rob Zettler?  Thanks. I’ll hang up and listen.”

Former WSKO midday host Danny Parkins, who left for Kansas City two years ago this week, also criticized the move in a lengthy message board post earlier this week.

Everyone has a radio and they know how to use it.  But what about fans who don’t have a smartphone?  What about smartphone users who have to be mindful of their data consumption so they don’t rack up hefty overage charges?

Simone told CNYRadio.com he knew, before the announcement was made, that it might be “unpopular” with people.  But, “looking at how people do things, how they receive their information,” Simone reasoned sooner or later, “it was going to happen anyways.”

“We knew this would be a problem,” Simone admitted, but he believes it will affect “very few people” in the Chiefs fanbase.  Even Simone admitted, “I hate my mobile device.  But smartphones are just how we all seem to be doing everything today.”

As proof, he points to the team’s previous investment in equipment to stream video of Chiefs games live on milb.tv.  He said fans have responded positively and he hopes that the Syracuse Chiefs Baseball Network will also reinforce and expand interest in the team.

Factor 4: Total freedom, around the clock

Inside of Lindsay Kramer’s article on Thursday, it was revealed that the Chiefs paid Cumulus Media $25,000 to lease the airtime for all of the Chiefs’ games last season.  In addition to the aforementioned nighttime signal limitations, Brent Axe cited sources today, who said Cumulus Media wanted the Chiefs to pay a higher rate for the air time going forward.

While Simone didn’t discuss his negotiations with Cumulus today, he said the team will gain plenty of new opportunities by managing its own online stream.  For example, yesterday’s announcement promised at least two weekly special programs.  Sundays on “Chiefs Digest,” announcers Jason Benetti and Kevin Brown will recap the previous week.  On Fridays, the pair will host an interview show called, “Where Have You Been?”  The announcement said more shows would be added throughout the season.

Simone told CNYRadio.com having control of a dedicated audio stream “allows us to be doing all the things we want to do, and we don’t have to ask a radio station for extra air time,” a request that would typically be met with the station wanting more money from the team.

Even if there isn’t a game or an interview show happening live, “there will always be something there,” Simone said of the network.  All of the live programming, even games, will be recorded and rebroadcast at different times.  For example, fans who can’t break away from work to listen to a day game might be able to catch an encore that evening.

Last but not least, Simone says going online offers new promotional opportunities.  “When people download the app,” Simone explained, “we can have an alert appear on the screen to say something like: ‘Chiefs game begins in 15 minutes,'” even if they aren’t actively using the app at the time.  “With radio, you just can’t do that,” he said.

Simone also noted the obvious benefit that the online network has a “wider reach,” allowing the team to reach “more fans everywhere,” not just those who happen to live within the local radio coverage area.

That mobile app, by the way, isn’t available just yet — so if you’ve been scouring the iPhone App Store or the Google Play, you’re not missing anything.  Simone says the app will definitely be ready before the Chiefs play their first game of the season — an away game next Thursday — but there’s still some final tweaks to be made before the app is made available to the public.  It’ll be free, and download links for iOS devices and Android devices will be posted at syracusechiefs.com.