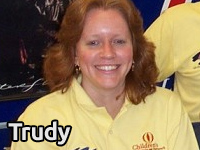 UTICA-ROME — Although she started at Lite 98.7 (WLZW) exactly 20 years ago today, midday host Trudy announced she’s celebrating 15 years with the adult contemporary station today.  Many broadcasters joke that they got into broadcasting so they wouldn’t have to do math, but Trudy says there’s a good reason for the numbers not matching up.

Trudy joined WLZW on April 17, 1993, after having previously worked at the former KG104 (WKGW).  She joined WLZW on overnights — back when many stations had live DJs around the clock.  Before long, she worked her way to the station’s popular 7pm-midnight “Nite Lite” love song and dedication show, and eventually, to the midday shift.

In an article on Lite 98.7’s website today, Trudy explained why she’s calling it her “15th anniversary” even though she started 20 years ago.  She was away for five years, working at one of WLZW’s sister stations in the Albany-Schenectady-Troy market, 105.7 The Buzz.

After Trudy left for Albany in 2003, middays at Lite 98.7 were hosted by Shelly Morgan, and later, Greg McShea.  Five years later, almost exactly to the day, a series of changes in Utica and Albany allowed Trudy to return to her midday shift at Lite 98.7, while McShea moved to the same shift at sister station Big Frog 104 (WFRG).

On the WLZW website today, Trudy shared several photos from her years at Lite 98.7, including a shot of the old WLZW air studio on Clark Mills Road in Whitesboro, various remotes, Children’s Miracle Network radiothons, and the station’s current studio on River Road in Marcy.  (And you’ll spot some other past and present WLZW personalities, including your CNYRadio.com editor, in some of the shots.)

We wish to extend our congratulations to Trudy on her anniversary at Lite 98.7!