SYRACUSE — Our latest Picture of the Week headline has nothing to do with the 2:02 commercial breaks Chuck Woolery used to introduce during TV’s Love Connection back in the 80s.  Rather, we’ve got two local morning radio co-hosts being photographed at two different recent events… and the photos came to us from two different contributors. 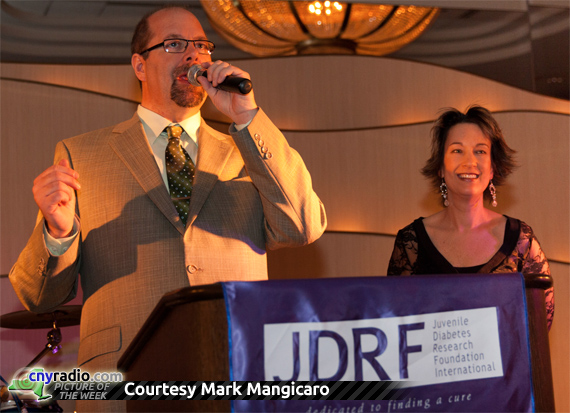 This past Saturday, 93Q (WNTQ) morning hosts Ted Long and Amy Robbins returned for the 8th year serving as emcees for the Juvenile Diabetes Research Foundation’s “Diamonds and Denim Gala” at Turning Stone.  Ted and Amy not only hosted the event, but they were honored with the JDRF’s “Living and Giving Award,” recognizing the pair for their community involvement in helping to find a cure for juvenile diabetes.  Frequent Picture of the Week contributor Mark Mangicaro was there, and we thank him for sending in this photo. 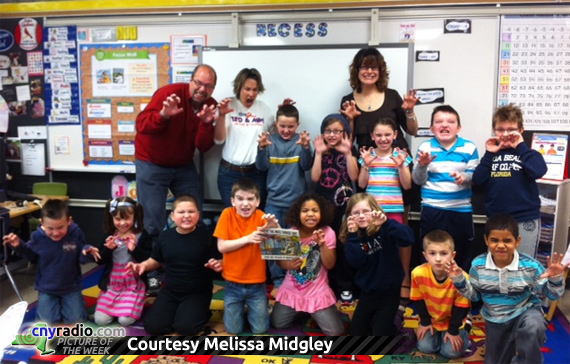 And this second photo has been waiting in line for a bit longer.  As part of “Read Across America Month” in March, Ted and Amy read the classic book, “Where the Wild Things Are,” to a classroom full of second graders in Solvay.  And here’s an interesting connection: you might recognize the teacher standing with Ted and Amy — former Sunny 102 (WZUN) morning co-host Melissa Midgley, who sent in this photo.  Midgley tells CNYRadio.com everyone posed with “scary monster faces” inspired by the book.  She also said students prepared questions for Ted and Amy, and they were assigned to write a biographies about the duo based on their responses.

Thanks again to Mark Mangicaro and Melissa Midgley for sending in the photos that made this edition of “Picture of the Week” possible.  Has it been awhile since your radio or television station has been in the POTW spotlight?  “Picture of the Week” is primarily driven by reader submissions, so whether you’ve got snapshots from recent happenings or a notable “blast from the past,” all you have to do is send them in!  The address is cnyradio@cnyradio.com and we present a new Picture of the Week every Friday at 7:00am.