SYRACUSE — There’s plenty of excitement these days about the Syracuse Crunch, the AHL affiliate of the NHL’s Tampa Bay Lightning.  The team has been undefeated so far, through the first two rounds of the Calder Cup Playoffs.  Last Friday, a “Pregame in the Plaza” was offered to fans getting ready for the game in which Syracuse would clinch the Eastern Conference Semifinal series… and local radio and TV personalities were there too. 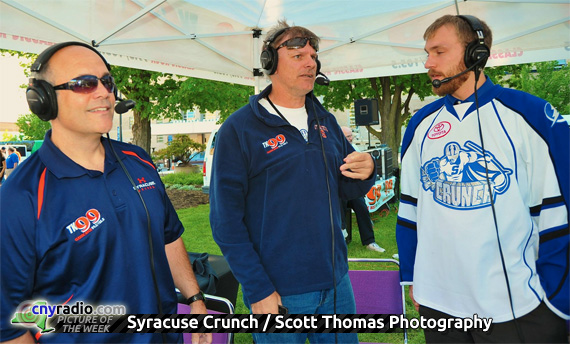 Here are Gomez and Dave, from the morning show at TK99 and TK105 (WTKW/WTKV).  During their live broadcast, the pair talked with Syracuse Crunch defenseman Carl Nielsen. 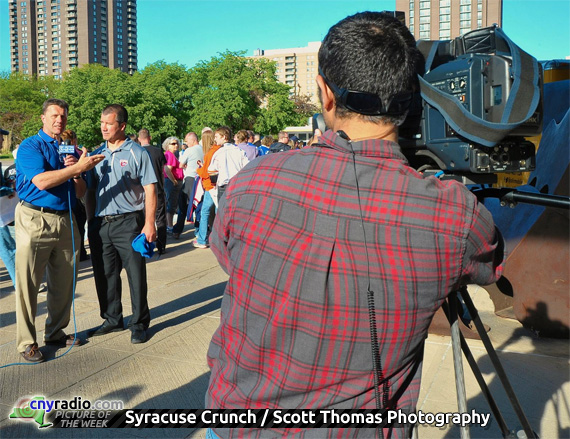 The third round of the playoffs begins tomorrow, with the Crunch facing the Wilkes-Barre/Scranton Penguins for a best-of-seven series.  The Crunch have home ice advantage for tomorrow night’s game, along with game 2 on Sunday. If necessary, the series returns to Syracuse for game 5 on Saturday, June 1 and game 7 on Wednesday, June 5.  All of the games are carried live on The Score 1260 (WSKO).

You can see more photos from last weekend’s Pregame in the Plaza, taken by Scott Thomas Photography, on the Syracuse Crunch Facebook Page.  The “preview” photo was snapped by your editor, who didn’t make it to the plaza events, but was in attendance for the game itself.

We’re always interested in sharing a look at what’s happening inside your local radio or TV station!  Photos (or videos) of recent events or notable “blasts from the past” are always welcome.  Send those shots to cnyradio@cnyradio.com or upload through the Contact Form.  There’s a new Picture of the Week every Friday at 7:00am… and it’s thanks to your submissions, we can make that promise.

Editor’s Note: Today’s POTW was set to appear on the site at 7:00 this morning, but it looks like there was some kind of error with the auto-posting feature.  Didn’t realize until 11:00am… apologies for the delay!

2 Comments to POTW: Radio and TV Pregame with the Syracuse Crunch (2013)