SYRACUSE — Even though our latest Picture of the Week was taken just a little under two years ago, it’s already got some upstate New York broadcast history in there.  It’s a shot of the regional master control facility inside of NewsChannel 9 (WSYR-TV).  Take a close look at the photo, and see if you can spot why it’s historic.  If not, we’ll explain. 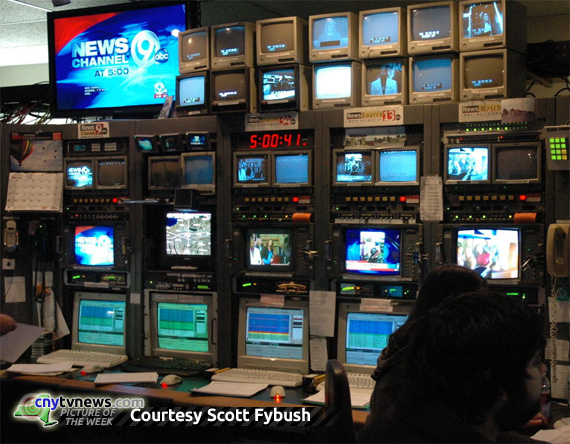 Your first hint at the history of this photo — Scott Fybush, the man behind the long-running NorthEast Radio Watch column, says he took this photo on June 3, 2011.  At the time, WSYR-TV and its sister stations were owned by Newport Television.  In this photo, from left, you can see equipment dedicated to the operation of WSYR-TV and subchannel 9.2, Binghamton ABC affiliate WIVT 34 and NBC affiliate WBGH-CA 20, Rochester ABC affiliate WHAM-TV 13.1 and CW-WHAM 13.2, and Watertown ABC affiliate WWTI 50.

Since this photo was taken, the private equity group that owned Newport decided to cash-out, selling most of the upstate New York stations to Nexstar Broadcasting.  But because Nexstar owns the CBS affiliate in Rochester (WROC-TV), it could not take WHAM-TV from Newport.  As a result, the connection between WSYR and WHAM — which dated back to the earliest days of “the hub” under the ownership of The Ackerley Group — was finally severed.  WHAM-TV is now controlled by Sinclair Broadcast Group, and Rochester-based Fybush tells CNYTVNews.com the station’s master control duties are now handled by a similar hub facility inside of Sinclair’s WSYX/WTTE in Columbus, Ohio.

Another piece of history — look closely at the station logos  near the top of each set of equipment racks.  Although you’ll see the current NewsChannel 9 logo in the giant monitor in the upper-left corner, the old logo which graced the airwaves from the mid 1990s through 2010 (and still appears on the I-690-facing side of WSYR-TV’s studios) appears just below on an equipment rack.  Look to the right, and you’ll see “clones” of this logo for the other stations down the line.

At one time, The Ackerley Group’s corporate website actually showed all of these stations using logos nearly identical to NewsChannel 9.  But only two stations — NewsChannel 34 in Binghamton and NewsChannel 20 in Utica — actually “cloned” the Syracuse logo, news music and other design elements.  The logos visible in this shot for NewsSource 13 in Rochester and NewsWatch 50 in Watertown were never actually used on-air.  Although Rochester did use a similar-looking logo for awhile, the WOKR/WHAM-TV version used different colors, and Rochester continued to use graphics and music which differed from those used in Syracuse. 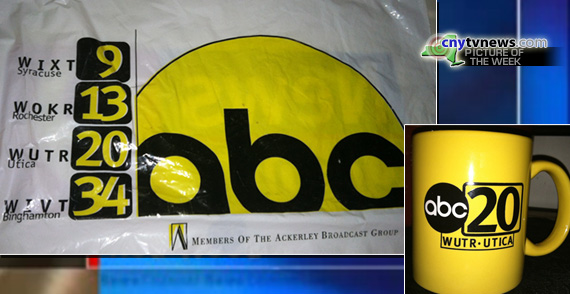 Writing about this history reminded your editor of a “giveaway of State Fair past” from many years ago — the bag on the left side of this photo was given away one year at the NewsChannel 9 booth, showing all four Ackerley-owned upstate ABC affiliates with similar-looking logos.  The coffee mug at right was a parting gift after your editor’s stint working there as a part-time producer/reporter back in 2001.

Although Clear Channel sold WUTR in 2003, the Nexstar acquisition of Newport brought WSYR-TV and WUTR back under the same ownership last year.  But even though WHAM-TV’s departure leaves room to add another “spoke” to the hub, to the best of our knowledge WUTR, Fox affiliate WFXV and MyTV affiliate WPNY-LP have avoided being “re-hubbed,” as they continue to operate their own master control facilities in Utica.

In addition to the stations mentioned so far, “the hub” in Syracuse has and continues to operate master control for Elmira NBC affiliate WETM’s two signals.

Although we’ve got a few vintage prints ready to scan for a “rainy day,” we’re very glad Scott Fybush responded to our open call for photos on Facebook yesterday.  It’s his photo from WSYR-TV master control which provided the inspiration for this look back at local TV history.  We’re always grateful for reader-submitted photos (or videos) related to local television or radio, past or present… we could be featuring your snapshots right here sometime — just send those shots to cnyradio@cnyradio.com.

And while there’s a new Picture of the Week right here every Friday at 7:00am, we’ll thank Scott Fybush again by pointing out he features a different Tower Site of the Week every Friday.  More often than not, it’s more than just a single photo of a single tower.  Scott visits radio and TV stations all over the country, and each week, he focuses on a specific market, sharing several photos of towers, studios, master control facilities and more.  (Some markets are large enough to warrant a series of installments.)  Check it out — along with NorthEast Radio Watch on Mondays — at fybush.com.  Order yourself a “Tower Site Calendar” while you’re there!

← WUTI to be silent for weeks after vandals hit tower site
Help wanted: Become a volunteer writer for this website →