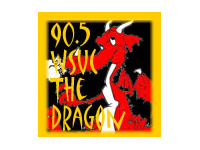 CORTLAND — The fiery breath of “90.5 The Dragon” (WSUC-FM) will soon cover more territory beyond the SUNY Cortland campus.  The station — which also serves as a part-time repeater of Oswego-based NPR news/talk affiliate WRVO — is well on its way to gaining final FCC approval for an increase in transmission power.

According to recent FCC filings, SUNY Cortland has completed work to increase effective radiated power to 1,400 watts, from 210 watts.

Both the current license and the construction permit show the station transmitting from the same location, at the same height, atop the Memorial Library.  So it’s no surprise that the 60dBu contour maps on the FCC website show the “new” signal has the exact same shape as the “old” signal, but the new one just covers a larger area.

The FCC approved a construction permit for the upgrade in October 2010.  By applying for “license to cover” on May 20, SUNY Cortland officially informed the FCC that the upgrade work is complete and the special conditions have been satisfied.  The application was “accepted for filing” on May 29, which usually means the FCC expects to issue final approval within a few weeks.

WSUC-FM is programmed and hosted by SUNY Cortland students during the academic year.  When school is not in session, and during certain “off-hours” of the day when the station is unmanned, it simulcasts SUNY Oswego-based WRVO.