SYRACUSE — Exactly 21 years ago today, Genesis rocked the Carrier Dome during the group’s “We Can’t Dance” World Tour.  It goes without saying that the concert received plenty of attention from the local media, and at least one local broadcaster has held onto some souvenirs from that night in 1992. 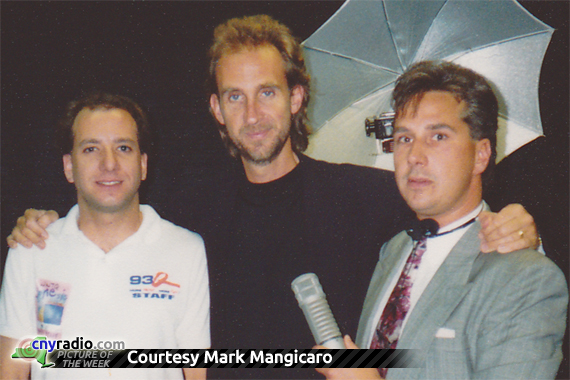 At left, that’s frequent Picture of the Week contributor Mark Mangicaro, back when he used to work at 93Q (WNTQ), with Mark Turcotte, promotions director at the time, on the right.  Between them is none other than guitarist Mike Rutherford.

And if you’re wondering what’s opposite the 93Q logo on Mangicaro’s shirt, here’s a closer look: 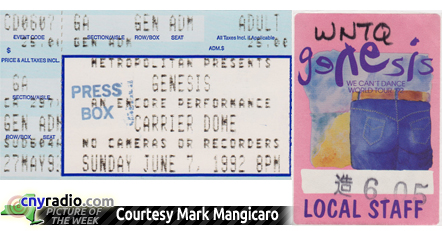 These were the fabric sticker press passes issued to members of the media, along with a ticket stub Mangicaro saved from the event, showing Sunday, June 7, 1992 at 8pm.  General admission tickets were $25 each, and this ticket was stamped to provide access to the press box.

Our thanks to Mark Mangicaro for sharing this “blast from the past!”  We’re always interested in taking a look at what’s happening inside your local radio or television station today — or anything notable from the past.  Just send those shots to cnyradio@cnyradio.com, or upload via the Contact Form.  There’s a new Picture of the Week every Friday at 7:00am… and it’s all thanks to reader-submitted photos like the ones you just saw here today.