SYRACUSE — For at least the second year in a row, the Town of Cicero’s Community Festival Parade had a local broadcaster leading the way.  NewsChannel 9 (WSYR-TV) Chief Meteorologist Dave Longley, a resident of the town, served as the Grand Marshal for this year’s parade. 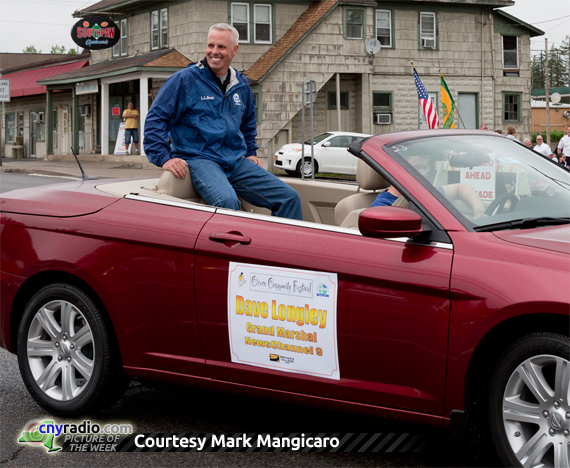 Our thanks to Mark Mangicaro for the photo — not only is this his second POTW contribution in a row, but it’s the second year in a row he had his camera at the ready to catch a shot of the lead car in the parade.  (Last year, 93Q’s Amy Robbins did the honors.)

This year’s parade took place last Saturday, and if you’ve ever been to Cicero, you might recognize this shot was taken along Route 11, just a bit south of the intersection with Route 31.

Although longtime viewers and fans know Longley grew up in Oswego, and earned his meteorology degree from the SUNY campus there, he’s lived in Cicero since the late 1990s.  Mangicaro says Cicero is a pretty “media-heavy” town… and tells CNYRadio.com that he, Robbins and Longley were wondering if perhaps we’ll see another broadcaster / Cicero resident like Glenn “Gomez” Adams (from TK99) or Joe Galuski (from 570 WSYR) perched atop the convertible in next years’ parade.

(It may not be for the parade — but we can hint that you’ll see one of those two morning radio guys in our next installment of Picture of the Week, next Friday.)

We’re always interested in taking a look at what’s happening today inside local radio and TV — or a notable “blast from the past.”  Although we already revealed next week’s photo has to do with Syracuse radio, our direction after that is entirely up to you, the readers.  More Syracuse?  Utica TV?  Ithaca radio?  A classic shot from decades ago?  Just send those shots to cnyradio@cnyradio.com and we’ll keep featuring another Picture of the Week (or the occasional video, as we’ve done before), every Friday at 7:00am.