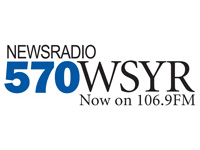 Updated 10/20 — SYRACUSE — An obituary published today advises, “be prepared to smile, laugh, and cry” at a celebration of life this weekend in Cazenovia, in memory of former WSYR radio news anchor Tara Howard Knauff.  She died on Monday following a battle with cancer.

The obituary appeared in today’s edition of the Syracuse Post-Standard, and on syracuse.com.  Friends, colleagues and family will be gathering at the Brae Loch Inn of Cazenovia this Saturday from 3-6pm, where they’ll be invited to share “stories of her journeys in journalism, of horses and dogs, and of course, the things that made her uniquely Tara,” says the obituary.

According to the obit, Howard’s battle against cancer was “epic,” demonstrated by the fact she was diagnosed four years ago, and was told at the time, she had just “weeks” to live.  During those four years, even while undergoing treatments of all types, Knauff continued her work as an editor, writer and producer for ABC Radio News in New York City.

Earlier in her career, Howard worked from 1991 to 2000 as a reporter/anchor for Syracuse’s Newsradio 570 WSYR.

In lieu of flowers, anyone wishing to memorialize Tara with a gift is encouraged to consider one of these three organizations, as listed in the obituary:

For cancer care and research, Sloan Kettering accepts donations on behalf of a loved one here: mskcc.convio.net/goto/Tara_Knauff

The Thoroughbred Retirement Foundation is the largest equine sanctuary in the world devoted to the rescue, retirement, rehabilitation and retraining of Thoroughbred horses no longer able to compete on the racetrack: www.trfinc.org/Make-a-Gift-c9.html

Tara Howard Knauff was survived by her husband bob, along with siblings, nieces and nephews.  Our condolences to her family and to all of her colleagues in radio who are mourning her passing.

Added 10/20 — Former WIBX news director John Swann writes in to fill-in some details that were not mentioned in the obituary.  He tells us Tara Howard is a Central New York native, having grown up in Remsen — and started her radio career at WIBX in 1985.  We’ll take his word for it — the previous year, Swann himself started what would become a 12-year run at WIBX.