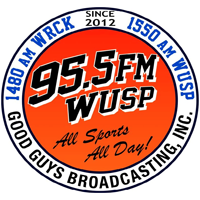 UTICA-ROME — From the “while we were on hiatus” file, all-sports 95.5 WUSP has become an affiliate of the CBS Sports Radio and Yahoo! Sports Radio networks.  But, in a twist not seen often in Central New York, it’s a two-way connection with Yahoo, as the network has picked up one of WUSP’s locally-produced programs.

Longtime local broadcaster Tom Coyne, one of the founders of Good Guys Broadcasting and WUSP morning drive host, tells CNYRadio.com that the station airs The Jim Rome Show weekdays from noon to 3pm.  Other CBS offerings on the schedule include the late night Ferral on the Bench and The DA Show.  Coyne says the station links up with Yahoo Sports Radio mostly on weekends, filling the hours in between broadcasts of local games and New England Patriots football.

Coyne also tells CNYRadio.com that WUSP’s locally-produced “MMA Friday” show has been picked up nationally by the Yahoo Sports Radio Network.  The show, hosted by Paul LaPorte and “Shooter” Graham, airs locally on Fridays from 4-6pm.  A separate one-hour version is produced in Utica and broadcast on the YSR network on Fridays at 11pm.

“While in Miami this past spring, we were approached by Yahoo executives about the show.  Not many programs go national out of this market, so this is a tremendous opportunity for us,”said Good Guys President Frank Abbadessa.

Global following for “Gloves Off”

While it’s not carried on a national broadcast network, Coyne says “Gloves Off,” which airs Mondays and Tuesdays from 4-6pm, has also gathered a rather strong following.  In addition to being broadcast locally on WUSP, Coyne says the show — hosted by Chancellor Coyne and Larry Desiato — gets “big numbers in podcasts downloaded around the globe.  Love that internet!”