SYRACUSE — Fifty years ago, Rod Wood started his career in broadcasting.  And tonight — much to his surprise — NewsChannel 9 devoted most of its 5:30pm newscast to honoring the milestone.  Not wanting Wood to learn about the event in advance, the station did no promotions on-air, online or otherwise… and when you see how many people were on-hand in the studio, you might say organizers deserve a big hand for keeping it all under wraps.

There was no hint of anything unusual as the 5:30 half-hour of the ABC affiliate’s 90-minute early evening newscast got underway.  Wood and co-anchor Carrie Lazarus did the usual block of news stories, then a commercial break, followed by the weather forecast.  But when chief meteorologist Dave Longley wrapped up, the technical crew went from the forecast directly into a clip from Deborah Kostroun, the syndicated host of the “Bloomberg After the Bell Report” that the station airs every weeknight.

Regular viewers know that Kostroun usually appears a bit later in the newscast, and Wood always gives her a brief introduction.  But it instantly became apparent that Kostroun’s unusually-early appearance was purely intentional when, instead of offering her usual report, Kostroun congratulated Wood on his 50 years in broadcasting.

Her greeting was followed by another congratulatory message from ESPN’s Mike Tirico, who started his career at WTVH.  Tirico joked that Wood owes his longevity not to his desire to inform and educate viewers, but rather, “because you sit next to Carrie Lazarus all the time.”  Visible in an inset box on the screen, Wood opened his mouth as if to act like his secret had been discovered, and Lazarus leaned into the shot to show her appreciation for the compliment.

The photo mural of the Syracuse skyline was pushed aside, revealing dozens of guests standing in the newsroom behind the news set, including some of Rod Wood’s children and grandchildren, several officials representing the City of Syracuse, Onondaga County and a variety of past and present NewsChannel 9 employees including Mike Price. 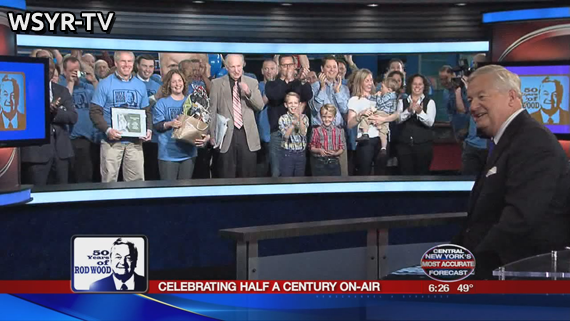 As the half-hour continued, Syracuse Mayor Stephanie Miner presented Wood with a proclamation signed by herself and by Onondaga County Executive Joanie Mahoney, naming today as “Rod Wood Day” throughout the City and the County.  Members of the Syracuse University marching band wore special “50 Years of Rod Wood” t-shirts as they played the school’s theme song, while members of SU’s cheerleading squad held up the letters “R-O-D” as they waved their pom-poms. 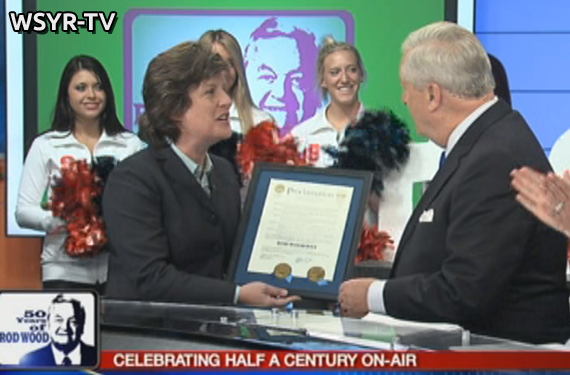 And those who’ve worked with Wood in the newsroom know he’s always game for some sweet treats — on cue, a huge cake with Wood’s photo was wheeled out onto the news set, as all of the guests looked on.  But before Wood would slice the first piece of cake, he stopped to ask whether it was chocolate or yellow.  Longley asked, “isn’t it usually ‘eat first, and ask later?'”

After the bulk of the celebration was over, Lazarus came back from commercial break solo to announce the station had given Wood the rest of the night off to go enjoy dinner out with his family.  Throughout the rest of the newscast, promos airing during commercial breaks announced a full special titled “50 Years of Rod Wood” will air on Monday, November 4 at 5:00pm.

Tonight, the station re-aired an interview from a previous special in which Wood recalled coming home from the Army and getting his start at WOLF radio in 1963.  Although he initially auditioned to be a disc jockey, he was told his voice sounded “too mature” to appeal to the teenage demographic, so he was urged to try news instead.  Over the next few years, he’d accept offers to move to WNDR, then to WHEN, which at the time, was paired with the former WHEN-TV.  The TV/radio combo would pave the way for Wood to get into television news, and he would eventually join channel 9 in the mid 1970s.