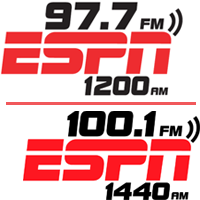 SYRACUSE — When an all-sports radio station has the rights to both baseball’s World Series and NFL football, which game wins in a scheduling conflict?  For ESPN Radio CNY, which is heard at 1200AM and 97.7FM in Syracuse, and 1440AM and 100.7FM in Oswego, the answer was a matter of splitting-up the usual simulcast.  But the FMs are just translators — legally, they are not able to originate their own programming.  So, how did Galaxy Communications do it without breaking FCC rules?

The answer is not really such a puzzler if you listen closely to the stations’ legal ID, which, per FCC regulations, must air as close to the top of each hour as possible.  The ID includes all of the appropriate call signs and communities of license.

Initially, FM translator W249BC Mattydale, better known to listeners as 97.7FM, was simulcasting 1200AM, WTLA North Syracuse.  But, right around the time the World Series started, one CNYRadio.com reader wrote in after noticing a change in the ID — it’s now a bit longer, with the additions of “WZUN-HD2 Phoenix” and “WZUN-HD3 Phoenix.”  Our reader also pointed out that during the World Series, the stations carried World Series on the AM side, while NFL football was carried on the FM side.

Your editor searched for his portable HD Radio receiver, scanned the dial and found that Galaxy’s classic hits Sunny 102.1 (WZUN) now in fact has two HD subchannels, and they both carry ESPN Radio.  Because W249BC is now simulcasting WZUN-HD2, instead of 1200 WTLA, it’s possible for Galaxy to broadcast one game on WZUN-HD2 (and then to 97.7FM) and a different game on WTLA.

According to the FCC’s website, W249BC changed its parent station from WTLA to WZUN-HD2 on October 24.  However, the FCC listing for Oswego FM translator W261AC (100.1FM) still shows WSGO 1440AM as its primary station.