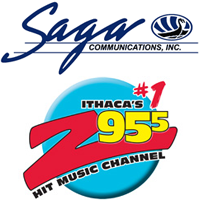 Updated 11:20am — ITHACA — The parent company of the Cayuga Radio Group, the dominant radio cluster in Ithaca, is looking to grow bigger.  According to documents filed with the FCC last week, Saga Communications wants to buy ROI Broadcasting CHR station Z95.5 (WFIZ) and three translators.  The $715,000 deal is being spurred by a bankruptcy filing involving one of Z95,5’s owners.

This deal hasn’t even appeared in the FCC’s Daily Digest yet, but the daily Tom Taylor Now email newsletter picked up on the November 6 filing in today’s edition.  The deal includes:

Z95.5 and the three translators are owned by ROI Broadcasting, Inc., which itself is owned 49% by George Kimble and 51% by Alan Bishop.  According to an Asset Purchase Agreement filed with the FCC, Kimble and his wife have filed for Chapter 7 bankruptcy, which requires a debtor to liquidate a business’ assets and distribute the proceeds to creditors.  A bankruptcy trustee appointed to the case has been authorized to sell the station.  Saga has placed a $71,500 deposit on the sale, and the rest will be due at closing.

Closing this deal could take longer than the average radio station sale.  Not only is the sale subject to the usual review and public comment period required by the Federal Communications Commission, but it also requires a green light from the United States Bankruptcy Court for the District of Arizona.  Despite the wait for two layers of federal government approval, the contract calls for Saga and ROI to “make good faith efforts to complete the Closing by January 31, 2014 so that Buyer [Saga] can file an application for renewal of the licenses of stations by February 3, 2014.”

FCC regulations limit the number of stations one company can own in a given market.  The exact limit depends on exactly how many stations exist in the market — the more stations in a market overall, the more stations a single owner can control.  Radio market boundaries are typically defined by Nielsen Audio (formerly Arbitron), and the FCC generally accepts station listings maintained by media consulting firm BIA/Kelsey in determining how many stations exist within a given market.

Because Arbitron stopped rating the Ithaca/Cortland market a few years ago, there’s no BIA/Kelsey list of stations.  Instead, Saga commissioned a broadcast engineering consultancy to create a “Multiple Services Study” of all radio stations whose signal contours overlap the five full-power stations currently owned by Saga, plus WFIZ.

Although the study found a total of 64 full-power stations in the overlap area, the study argues that, at the very least, the proposed purchase of WFIZ would keep Saga within this part of the FCC’s ownership limits:  “In a radio market hosting between 15 and 29 radio stations, an entity may own up to six radio stations, no more than four of which may be in the same service.”

Even though the study finds more than 29 radio stations, the purchase of WFIZ would put Saga in control of six full-power radio stations — including four FMs and two AMs.  Here’s how Saga’s portfolio would look if the deal is approved:

Saga also owns six FM translators, and the ROI purchase would add three more, but translators are not counted in the FCC’s ownership limits.

While Saga hasn’t declared any plans for the proposed acquisitions, it’s reasonable to expect some format changes after the deal closes.

WFIZ: The 2008 launch of Z95.5 represented the return of the CHR format to Ithaca radio after a very long absence.  But two weeks later, Saga countered with the launch of Hits 103.3, named after the frequency for translator W277BS, simulcasting the HD2 subchannel of full-power 97.3 WYXL.  It seems unlikely that Saga would continue to operate two CHR formats against each other.  Will Z95.5 remain intact, thanks to its full-power signal, or will Saga choose to keep its own Hits 103.3 branding?  Maybe we’ll see the two combine forces as “HitZ 95.5 and 103.3?”

That brings us to translator W235BR.  Though the FCC website says its primary station is WNYR Geneva, we’re told that W235BR is actually simulcasting WFIZ.  Looking at signal contour maps through the FCC website, it seems that Saga’s existing W277BS covers all of the territory of W235BR and then some, so it seems likely that CHR will remain on 103.3FM, while the 94.9FM signal could be reassigned or even sold off.

Translator W299BI: Not having heard “Classic Hits 107.7” before, your editor can’t make any guesses as to whether this format duplicates anything Saga is already doing, or if Saga would be able to simply continue the format unchanged.  (We’re a bit too far from Ithaca to get the signal — if any readers in the area can help us out, post your comments below or email cnyradio@cnyradio.com.)

Translator W242AB:  The third translator Saga is poised to pick up is currently simulcasting a Geneva station owned by Finger Lakes Radio Group.  Although FLRG is separate from ROI on paper, the two share some common ownership.  It seems unlikely that Saga will continue to simulcast a station owned by a different company.

Share your thoughts below.  We’re pleased to say earlier problems with commenting have been fixed.  You once again have the ability to post comments via Facebook, or, if you’d prefer not to share your real name, you can comment with a CNYRadio.com login.  If you don’t have a login, registration is free.

2 Comments to Saga moves to buy competitor Z95.5 in Ithaca