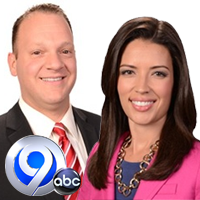 SYRACUSE — Two of the three primary on-air talent for “The Morning News” on NewsChannel 9 (WSYR-TV) will be leaving the ABC affiliate by the end of this year.  Co-anchor Tanja Babich and meteorologist Chris Brandolino have new jobs lined-up outside of Central New York.  Babich will be gone by the end of this month, and Brandolino will wrap up his three-year stay with channel 9 on New Year’s Eve.

CNYTVNews.com first heard of the departures a week ago, thanks to an anonymous reader tip.  After waiting to see if an official announcement might be made, we contacted News Director Rob Cartwright today and he confirms the upcoming departures.

Babich departing by end of November

Babich will continue to co-anchor alongside Dan Cummings through November 27, which happens to be the final day of the current Nielsen “sweeps” period.  Cartwright says “no announcement has been made” regarding Babich’s destination, but he tells CNYTVNews.com, “she will be leaving Central New York.”

A native of Toronto, Babich attended Cornell University and Northwestern University before joining NewsChannel 9 as a general assignment reporter in 2007.  Prior to joining The Morning News in 2011, Babich anchored the weekend version of the station’s morning newscast, and served for some time as co-host of the station’s mid-morning talk show, Bridge Street.  Babich also shared parts of her personal life on-air; during her time at channel 9, she and her husband have had two children and earlier this year, she became a U.S. citizen.

Morning meteorologist and Bridge Street co-host Chris Brandolino will finish out the year at NewsChannel 9 before moving to the southern hemisphere for the second time.  Cartwright said Brandolino has accepted an opportunity with the National Institute of Water and Atmospheric Research in Auckland, New Zealand.  Brandolino’s last day on NewsChannel 9 will be December 31.

Brandolino has been with NewsChannel 9 for about three years.  Longtime fans may recall this won’t the Brandolino family’s first time making the long move to the southern hemisphere.  After working on the morning and noon newscasts at channel 3 (WSTM) for more than 11 years, Brandolino moved to take a position with the Australia Bureau of Meteorology.  He was there for two years before returning to Central New York to work at channel 9.

In 2011, Brandolino and former Bridge Street co-host Kaylea Nixon shared the “Best TV News Hottie” awards from the Syracuse NewTimes’ reader-voted “Best of Syracuse” awards.  The weekly newspaper also called channel 9 “Best News Channel to Weigh Anchor” that year, after Brandolino and two other broadcasters (Keith Kobland and Tammy Palmer) had joined the station after previously working at different stations elsewhere in the market.  Outside of NewsChannel 9, Brandolino has also been sharing his talent with the broadcast meteorologists of tomorrow, as an adjunct professor at SUNY Oswego.