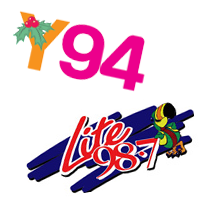 SYRACUSE and UTICA-ROME — The mystery is over as to when Clear Channel’s Y94 (WYYY Syracuse) and Townsquare Media’s Lite 98.7 (WLZW Utica) would trade-in their usual adult contemporary formats to go all-Christmas.  Both stations made the switch on Friday afternoon.

Lite 98.7 made the switch at 5:00pm, launching a “Kick-Off to Christmas Work Escape Weekend.”  At first we wondered if this was just for the weekend, but before we had a chance to ask, a listener posed the question on the station’s Facebook page.  A page admin responded, “We think we’re going to keep playing it so we can spread some holiday cheer around town.”

Regarding Y94, one CNYRadio.com reader wrote in to report the change at about 6:40pm.  By the time your editor had a chance to tune in, it was after 7:00pm and both WYYY and WLZW were airing the holiday version of the syndicated “Delilah” show.  While we’ve yet to find out if this is just for the weekend, or for the duration of the holiday season, Y94’s website is already adorned with snow and some mistletoe.

If, on Monday morning it becomes apparent that both WLZW and WYYY have in fact shelved their AC libraries until December 26, that means the stations that usually made the all-Christmas switch first in both markets could likely wind up being the last to deck the halls this year.  For several years, Galaxy Communications’ classic hits Sunny 102.1 (WZUN) in the Syracuse market and Mix 102.5 (WUMX) in the Utica-Rome market, were the first to go all-Christmas, on November 1, or within days after.

But less than 48 hours before WZUN and WUMX were expected to enter holiday mode, station management announced it had conducted some research which indicated, “the majority of our audience thought that we started playing the [Christmas] music too soon every year.”  Accordingly, Mix 102.5 won’t go wall-to-wall Christmas until Thanksgiving.  Sunny 102.1 will make the switch next Tuesday, to coincide with the start of “Lights on the Lake” at Onondaga Lake Park (the station is a sponsor of the event).

Syracuse radio listeners may have been more “polarized” by the start date of 24/7 Christmas music on the radio this year after the October 5 launch of “Holly-FM” on 105.3 (WNDR-FM Mexico) and FM translator 95.3 (W237AY DeWitt).  The earlier-than-usual launch is rumored to be a stunt for a brand new format to launch after Christmas, but owner WOLF Radio Inc. hasn’t yet revealed its post-holiday plans.  The previous “Love Radio” format has moved to 88.7FM.

2 Comments to Y94 and Lite 98.7 flip the all-Christmas switch