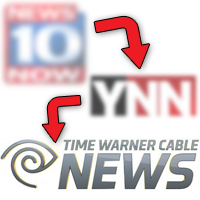 SYRACUSE — Next month, YNN will be rebranded as “Time Warner Cable News.”  Although it may be common knowledge among local broadcasters that the 24/7 local news channel is owned by and only available on Time Warner Cable, a majority of average customers didn’t — so the cable giant wants to make it unavoidably obvious.

Hat tip to Geoff Herbert on syracuse.com, who found the news on a Time Warner Cable blog post written by the company’s director of digital communications.

In addition to the new name, all 16 of Time Warner Cable’s local news operations are getting a complete graphic overhaul — so get ready to bid farewell to the on-air graphics that have been virtually unchanged since the operation’s 2003 launch as News 10 Now.  A video preview of the new, considerably more modern-looking graphics can be seen below.

“Our 24/7 news networks consistently rank among the highest viewed channels among our subscribers in many of these markets,” said Time Warner’s Jeff Simmermon. “Yet a recent customer survey showed that only 40 percent of our customers could identify Time Warner Cable as those news networks’ parent company.”

This, despite a barrage of on-air bumpers and other promotional materials over the years, using slogans as blatant as, “YNN: Only on Time Warner Cable.  Never on [Verizon] Fios.  Never on satellite.”

If the networks have such great viewership, why does Time Warner now feel the need to gear-up awareness of their ownership?  Simmermon didn’t elaborate on the reasons in his post, but it could be due to Time Warner losing over 300,000 subscribers nationwide in the third quarter of 2013.  Perhaps the thinking is that fans of the 24/7 local news channel — if they know it’s only available on cable — will think twice before pulling the plug.

In the past year or so, YNN’s websites have already been making sure visitors are aware — the YNN logo is accompanied by “Only on Time Warner Cable” at the top of the page, and if you want to view any video clips, you must first login with a Time Warner Cable ID, which is only available to subscribers.

The YNN operation based in Syracuse launched in 2003 as “News 10 Now,” inspired by the channel’s position on lineups throughout the region, stretching from Binghamton and Elmira, through Syracuse, and north to Watertown and Massena.  In 2010, Time Warner renamed News 10 Now and most of its local news channels nationwide “YNN,” short for “Your News Now.”

New York City’s NY1 was exempt from the YNN rebranding, but it’ll be included with the changes this time around — sort of.  The new and old names will be combined as “Time Warner Cable News NY1” but the long-running NY1 logo will stand alone most of the time, and talent will continue to verbally refer to the channel as “NY1.”  According to a New York Observer article, which praises NY1 but sharply criticizes its parent, the new graphics are expected to debut on December 16.

One Comment to YNN rebranding as “Time Warner Cable News”