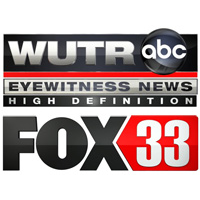 UTICA — Earlier this evening, we reported WUTR reporter Rachel Polansky is moving to Syracuse sister station WSYR-TV.  We just learned she’s not the only Eyewitness News staffer whose daily trips up and down Smith Hill are numbered.  Anchor Elsa Gillis announced she’s also leaving — for a new job in Louisiana.

Hi everyone! Happy Monday! I have some bittersweet news to share. This will be my last week with the Eyewitness News team. I have accepted an investigative reporter/weekend anchor position down in Louisiana. I’m excited for the new opportunity, but am so going to miss my co-workers, all our viewers, and the Central New York community. I truly have fallen in love with the area and it will always have a special place in my heart. Thank you so much for watching on WUTR/WFXV/WPNY, and interacting with me on Facebook. Have a wonderful Thanksgiving and holiday season!

Gillis was one of the original members of the Eyewitness News team when it launched in 2011, restoring local news to WUTR for the first time since former owner Clear Channel shuttered the ABC affiliate’s newsroom in 2003.

Just a little over six months after Eyewitness News debuted, the sudden exit of original co-anchor Caroline Gable created a vacancy that allowed Gillis to be promoted to co-anchor.  This past summer, the departure of news director and co-anchor Joe Parker left Gillis the anchor desk all to herself for about four months, until the station hired Don Dudley to replace Parker.

We’re always interested in what’s happening inside of local television and radio in Syracuse, Utica and Ithaca.  Anytime you’ve got news to share, cnyradio@cnyradio.com is the address — or you can use our “Contact Form,” where your name and email are optional.