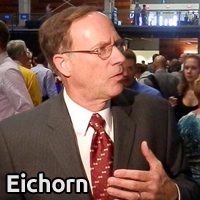 SYRACUSE — Less than a day after NewsChannel 9 (WSYR-TV) announced a big staffing shuffle, here comes another — one that could arguably be even bigger than the rest.  After five years away from TV, former chief meteorolgist Dave Eichorn will return to the ABC affiliate in 2014.

Sharing the announcement with CNYTVNews.com this evening, News Director Rob Cartwright said, “one of the most common questions I get from our viewers is whether [Eichorn] will ever come back to NewsChannel 9.”

Eichorn worked at NewsChannel 9 from 1990 through 2008, when he left to spend more time with family.  Even then, Eichorn has remained in the public eye, providing forecasts for Y94, and for the Syracuse Media Group’s syracuse.com (where he often presents forecasts in video format, minus the “green screen” chroma-key effect) and the Post-Standard.

Eichorn has also been sharing his talents with the forecasters of tomorrow, teaching meteorology classes at SUNY Oswego, the SUNY College of Environmental Science and Forestry and at Onondaga Community College.

Eichorn’s shift has yet to be determined, but Cartwright said Dave Longley will retain the title of Chief Meteorologist, which he obtained (along with a move from mornings to nights) when Eichorn left in 2008.

Currently, Longley appears on the station’s 5, 6 and 11pm newscasts.  Jim Teske currently appears at noon, and (as announced yesterday) will add The Morning News when Chris Brandolino leaves at the end of 2013.  Julia Weiden handles all of channel 9’s weekend newscasts — morning and night, in addition to fill-in duties during the week.