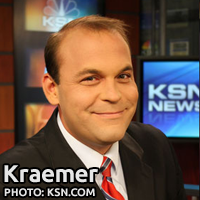 Updated 12/17 — WICHITA, KS — One of the cardinal rules for broadcast talent is to always remember, any microphone can be hot at any time.  But it looks like Justin Kraemer, a former reporter for Syracuse’s NBC3 (WSTM-TV) and Newsradio 570 WSYR forgot that rule for a moment, just as he was wrapping up last night’s late news at NBC affiliate KSNW in Wichita, Kansas.

After Kraemer bid viewers goodnight, the credits rolled and the production crew cut to an overhead shot of the studio, then to a towercam shot.  As the NBC chimes played out the end of the news music, Kramer could be heard muttering, “let’s get the f*** out of here.”

A viewer recorded the end of the newscast (using a camera or smartphone aimed at a TV screen) and posted it to YouTube.  Note: the following video clip contains profanity.

In addition to the viewer who recorded this clip, and the more than 151,000 people who’ve viewed it on YouTube as of Sunday afternoon, chances are good that many thousands more saw it live on-air.  According to Wikipedia, KSNW is “the flagship station of the Kansas State Network (KSN), a chain of NBC affiliates serving the western three-fourths of the state.”  KSNW’s newscasts are simulcast across the network, which includes at least five other stations.

Despite the title of the video, and despite the clearly-heard f-bomb, there won’t be any FCC action on the matter — because it happened during the FCC’s “safe harbor” hours (10pm to 6am, local time), during which profanities are permitted on the air.

Added 12/17 — Kraemer was fired by KSN on Monday, according to the Wichita Eagle.  The newspaper says Kraemer’s gaffe has been covered by media outlets across the country — including the Huffington Post — and even overseas, including the UK Daily Mail.  The clip was even discussed on last night’s edition of Jimmy Kimmel Live.

But it’s not all bad — Kraemer told the newspaper he was going to be leaving KSN soon anyway, as he has already accepted a new job elsewhere.  Kraemer didn’t reveal his destination, but said it is outside of Wichita, and he also said, “I don’t anticipate any problems” with the new job, even after Saturday night’s incident.

A tip of the hat to one CNYTVNews.com reader who emailed us about the clip, and we also saw it shared on Facebook by some of Kraemer’s other former colleagues in Syracuse.

Covering the happenings at 100+ stations in three markets is no easy task! We're always grateful for your "official" station announcements and "unofficial" insider tips. Anytime you've got news to share about local radio or TV, email cnyradio@cnyradio.com or use our Contact Form. Let us know if we can use your name, or if the information is being provided in confidence. In fact, the form allows you to leave your name and/or email address blank, if you don't even want us to know who you are.
← Looking for a job in local broadcasting?
POTW: Josh Grosvent’s new look →

6 Comments to Former Syracuse newscaster curses on TV in Wichita