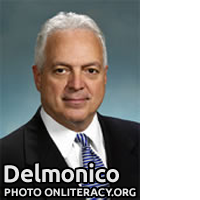 SYRACUSE —  Chances are, you’ve never heard his voice, but Joel Delmonico has enjoyed a long and influential career in Syracuse radio.  CNYRadio.com recently chatted with Delmonico just before he retired from the VP/Market Manager post at Clear Channel Media + Entertainment’s Syracuse cluster at the end of December.

Delmonico was out of work and had already had two careers under his built when his father, James — who, himself, had a storied career in broadcasting at General Electric in Schenectady — encouraged him to try out radio.  It would be a job “just for the moment,” until he could get back into teaching, the younger Delmonico, who had a family to support, told himself. He wanted to be a college professor.

“You have to love this job, because it’s very intense,” Delmonico said of his 50 hour work week, on his last day of work. He wished the best to his replacement, longtime colleague Rick Yacobush.

Consolidation has been a theme in the radio industry in the past few years. Delmonico started as an advertising executive for 570 WSYR.  At the time, radio stations didn’t operate in clusters. It was WSYR and “the first” WSYR-FM, which was soon to become Y94.  (The present-day 106.9 WSYR-FM gained its call letters when it started simulcasting its AM sister in exactly three years ago today).

Delmonico said Lonsberry is always entertaining, even if you don’t agree with him, so he’s pleased with the results.  “It’s hard to find people who are really good at doing it. We’ve tried a lot of people,” he said.

But what Delmonico is really proud of, and gets him talking the most, are the stations’ community service work, which he’s been involved in from the beginning.

“Probably the biggest thing for me, and I wouldn’t have stayed this long if we didn’t, is that we have been able to use the radio stations to help the community,” Delmonico said, naming a list of projects as if he was reading off a scroll.

Say Yes to Education, with Syracuse schools, and the McMahon/Ryan Child Advocacy Center, to name two.  One time, the stations put a sexual abuse survivor on the air, who talked about her experiences in an effort to shed light on the topic.

In 2000, WSYR and its kin won the National Association of Broadcasters’ Service to America award, beating out hundreds of stations across the country, for its community service. One of Delmonico’s career highlights was when, because of the stations’ community service, he got to ring the opening bell at the New York Stock Exchange.

Clear Channel’s Syracuse stations have also worked with the National Eating Disorders Association. Delmonico is on its board of directors.

The past few years have seen not only the deregulation of the radio industry but a proliferation of other avenues to listen.

All of Clear Channel Syracuse’s stations can be heard online and on mobile phones. Delmonico confesses that at first he wondered whether anyone would want to listen to the radio on their cell phones; now, with listenership up every month, he’s convinced.

While some decry the deregulation of the radio industry, when the Telecommunications Act of 1996 loosened rules on how many stations each company could own, Delmonico said it’s a good thing. By themselves, many stations were struggling at the time, and some might have gone off the air without it, he said.

Clear Channel is WSYR’s fourth owner during Delmonico’s tenure. While the broadcasting behemoth, which has mushroomed to more than 800 stations since deregulation, is based in San Antonio, Delmonico insists the Syracuse stations are still locally managed.

In retirement, Delmonico expects to keep up with his community involvement, and spend more time with his family. He and his wife have four grown children, all of them successful. Besides his charitable work, he’ll spend it on his woodworking hobby. He’s in the process of making dining room tables for two of his kids.

Kevin DeValk is a freelance writer. He grew up in Liverpool and interned at WTVH-TV while studying journalism at the State University of New York at Albany. Kevin was a staff writer for six years at the Finger Lakes Times in Geneva.  He lives in Henrietta.  This is his third story for CNYRadio.com and he can be reached at kevin@cnyradio.com.