This week, Dave Silvers from Utica’s Bug Country (WBUG/WBGK) heads to Albany to mingle with a couple of country’s biggest superstars. 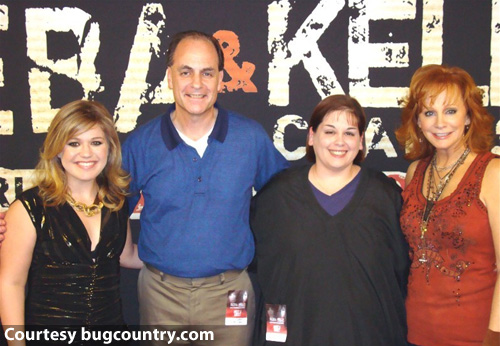 Silvers and wife Sandy had the chance to meet Kelly Clarkson and Reba McEntire when their “2 Worlds 2 Voices Tour” stopped at the Times Union Center in Albany on November 6th.  There are plenty of pictures from the concert itself (and many other shows), on Bug Country’s Concert Gallery page.

How Come Your Station Hasn’t Been Here Yet?
Since we revived CNYRadio.com in February, we’ve tried sooooo very hard to include POTWs from as many different stations as possible.  We’ve never had the same station 2 weeks in a row, and we even avoid featuring the same market in back-to-back weeks when possible.  With over 100 stations in the four markets we cover, you’d think we could go for 2 years of POTWs without using the same station twice… but if you look back, we’ve already repeated a few stations, and it hasn’t even been a year yet.

Why?  Well, some station websites seem to be slow in adding new photos… others make it impossible for us to tell which pictures are new and which ones are old and quite a few stations don’t even have photo pages or websites at all.

So… if your station hasn’t been featured in our “Picture of the Week” yet, it’s probably due to one of the reasons above.  But… nothing says we’re limited just to pictures on station websites.  In fact, we’d looooove it if you sent a picture directly to us!

Whether it’s a shot of something recent at your station, or a blast from the past, you can send pictures to us via our Contact Form page (it lets you upload images) or you can e-mail pictures(at)cnyradio.com.