LOWVILLE — You probably don’t hear about the Lewis County Fair unless you actually live in Lewis County, but this year’s fair managed to attract many country music fans, along with Watertown’s leading radio station, Froggy 97 (WFRY). 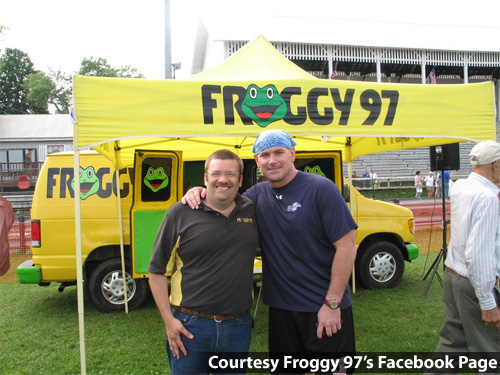 That’s because national recording artist Keith Anderson performed at the Grandstand on July 23.  Pictured above is Anderson, on right, along with Froggy 97 afternoon host Bud Green.  There’s much more on the Froggy 97 Facebook Page, which you can view even if you’re not a “friend” of Froggy 97, or even if you’re not a Facebook user at all.

We’re always interested in a look at what’s new at your station, or a blast from the past.  Just send those shots to cnyradio@cnyradio.com.  There’s a new Picture of the week every Friday.

Your humble editor is planning to post a “photo roundup” of stations broadcasting live at the New York State Fair.  We’ll be taking shots of station broadcast booths as we spot them throughout the fairgrounds, but the best way to make sure your station is included is to email us your station’s location so we know where to look.