SYRACUSE — Nominees and Hall of Fame inductees for the Syracuse Area Music Awards (a.k.a. “the SAMMYs”) were announced yesterday during a press conference at the Dinosaur Bar-B-Que.  Sunny 102 (WZUN) morning man “Big Mike” Fiss had the honor of announcing the list of SAMMY nominees. 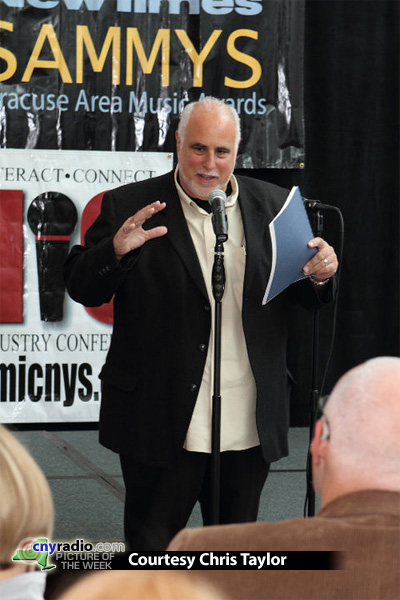 Our thanks to local musician Chris Taylor for taking this photo, and to Big Mike for sending it to cnyradio@cnyradio.com.

Big Mike reminds us at the SAMMY Awards will be handed out during a “lavish gala (with a red carpet!)” on Friday, October 8 at the Oncenter.  The awards ceremony is one of many events scheduled during the weekend-long Music Industry Conference (MIC) being organized by the same folks who organize the SAMMYs.

After seven years as the emcee for the awards ceremony, Fiss tells us he’s handing off those duties to another radio personality, Dave Frisina from sister station TK99/105 (WTKW/WTKV).  But Big Mike will still be there, along with his morning co-host Melissa Midgley, as presenters during the event.

Notable Names in the Hall of Fame

According to the Syracuse Post-Standard, Galaxy Communications is among this year’s inductees to the SAMMYs Hall of Fame.  The locally-owned company owns Sunny 102 and TK99, along with several other stations in the Syracuse and Utica-Rome markets.

And in a second-degree connection to the TV side of the Syracuse market, Hall of Fame inductee Jeff Tortora, a drummer for The Blue Man Group, is the brother of Jim Tortora, the director of news and content at ABC affiliate NewsChannel 9 (WSYR-DT).

Hall of Fame inductees will be introduced at the Dinosaur on October 7th, the night before the SAMMYs.  Big Mike says old friend and radio legend Tommy Nast will emcee that reception.

Got Pictures?  We need ’em!

Tracking down new pictures every week is no easy task… sometimes we just don’t have time (you may have noticed last week, there wasn’t a POTW).  So… we’re always very grateful for your reader submissions.  Whether it’s a snapshot of something happening today at your station, or a look back at something/someone notable from the past… send ’em to cnyradio@cnyradio.com or if you prefer, upload via the Contact link in that menu at the top of the page.  There’s a new Picture of the Week (as long as you keep sending ’em in) every Friday.