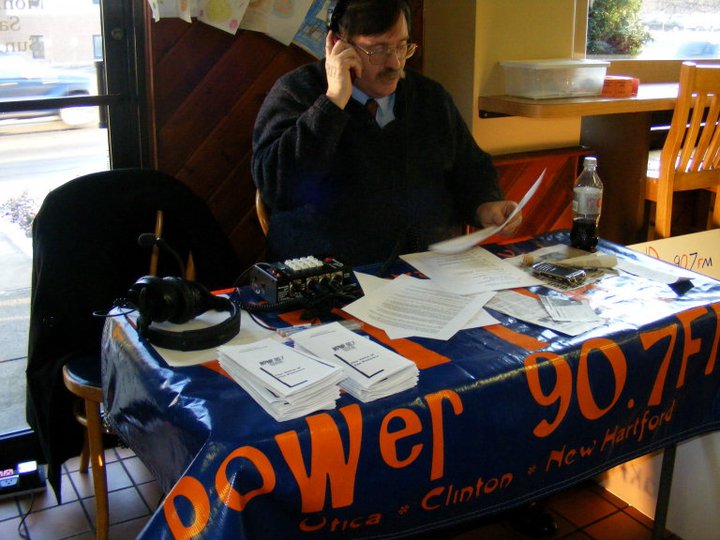 UTICA/ROME — When you think of morning radio in the Mohawk Valley, you might come up with names like Matt Herkimer and Polly Wogg, Mark Richards, Big Poppa, Gomez and Dave, Bob Cain, Big Mike, Bill Keeler or Hank Brown. But some students and neighbors of Utica College already miss “The Fat Old Man,” who recently ended a five-year run on the college’s 90.7 WPNR.

When CNYRadio.com reader Kurt Wiehenstroer first told us about The Fat Old Man Show ending, he wrote, “it was a REALLY good show and I will miss it.”  Several fans posted comments on the show’s Facebook page, expressing similar sentiments.

When we heard from Kurt, we wondered, who is “The Fat Old Man?” And with class schedules changing each semester — usually forcing college radio stations to also change their lineups each seemster — how did he manage to keep the same timeslot five years in a row?

As it turns out, “The Fat Old Man” is still on the UC campus every day — just not hosting his radio show anymore. His real name is Paul Lehmann, and his real job is Director of Student Activities.

At many schools, budding broadcasters must take turns hosting morning drive because there’s so much competition for the prominent timeslot.  But at WPNR, Lehmann tells CNYRadio.com he got the gig because, “no one else would get up that early in the morning.”

At first, he only did the show twice a week, but the radio bug worked its magic, and Lehmann was soon doing the show every weekday, year-round, only taking time off when “vacation or family situations prevented me from being there, but that wasn’t often.”  He even took the show on the road a couple of times, broadcasting live from nearby locations including a popular breakfast spot a little ways down Burrstone Road.

Last Friday was Lehmann’s final show. In a farewell message he gave on-air, and later posted on Facebook, he explained how the show got started:

We started with a simple premise. If we want people to find WPNR we need a morning drive time presence. (…) The whole idea of the show was to try to play music that would appeal to a wide audience and then to make the show light and fun. We didn’t want loud music or a loud dj, there’s a place for that and if you want that its easy to find but we wanted something a little bit different. When I thought of how to do the show I imagined that I was sitting at the kitchen table with a spouse, roommate, the kids – whoever and as we have breakfast and get ready for the day while reading the paper we would discuss what we saw. We added trivia frankly so someone would call and I’d have an idea if anyone was listening, well except for those times in which someone didn’t turn the phones back on after a live remote.

Lehmann says, when he and his son Jay brainstormed the concept of the show together — he hadn’t intended on hosting it himself. He tells CNYRadio.com, “We talked about the ideas (…) as a suggestion for a student to do, but no one stepped up so I did it.”

In addition to reaching the Utica College campus, Lehmann tells CNYRadio.com his audience included “teachers and parents waiting with their kids for the bus. One of the things I heard alot was that it was one of the few shows that both the kids and the parents could listen to and agree on.”

According to FCC records, WPNR’s city-grade signal blankets the entire City of Utica, along with some of the most-populous suburbs, including New Hartford, New York Mills, Whitesboro and Yorkville.  (Just like any other station, WPNR can be heard beyond the “city-grade” radius, though reception quality may vary depending on geography and other conditions.)

Although Lehmann says he enjoyed the chance to build an audience and draw more attention to WPNR, his farewell message included mention of a personal toll:

To be honest I need to take care of me, all of me, not just my ego by doing this show. I used to walk a few miles every morning but now I do this show. I’ve gained weight and lost a lot of sleep. I would spend 3-4 hours each Sunday night putting the week’s show together and then wake up everyday at 4:40 to get the news weather and sports. I just can’t keep doing that.

Despite ending the show, Lehmann says it was a blast while it lasted.  “If I didn’t [have fun], I would have given it up along time ago. And of course the listeners keep you going. I can’t tell you how many times I would be thinking of giving up the show and I’d get calls about how much the show meant to people, how much they enjoyed it and it would keep me going.”

On Facebook, Paul said fans who want to save the show can do only one thing: “get a real station to hire me for a real salary.” He doubted that would actually happen, but when CNYRadio.com asked how serious he was, he said, “I would consider it. I loved doing the show but cant afford all the time and sleep deprivation for a ‘hobby.’ It would be interesting to see what we could make of it with a broadcast range of more than 10 miles and some marketing to help boost it. I really do think it could do well.”

For now, Lehmann says he accomplished his goal: to increase WPNR’s visibility in the community.  “I’ve been told repeatedly that people found the station because of the morning show,” he told us via email this week.

Who will take Lehmann’s old timeslot on WPNR? With final exams ending this past Monday, there likely won’t be a replacement until students return to to campus for the spring semester in late January. But even without a host, WPNR won’t be completely silent, thanks to an automation system installed in 2009.

Our thanks again to CNYRadio.com reader Kurt Wiehenstroer — were it not for the brief tip he provided to us, we may never have had the chance to tell this story.  We’re always grateful for your news tips, press releases or anything else you can share, to help us document the latest happenings at radio and TV stations across Central New York.

You can reach us at cnyradio@cnyradio.com or click “Contact” in the menu at the top of the page.  In either case, if you don’t want anyone to know YOU were the source, just let us know and we’ll keep your name completely out of it.