SYRACUSE — Ask viewers to name people who work in local TV news and you’ll probably hear names like Matt Mulcahy, Carrie Lazarus, Rod Wood, Jackie Robinson, Christie Casciano and Michael Benny pretty often.  How about Roger Mirabito or Kristy Smorol?  People inside local TV news know these names, but outside of their respective stations’ walls, they are among the many “unsung heroes” who play major roles in bringing the news to you every day and night.  This week, co-workers are saying goodbye to both, as they head onto new jobs outside of broadcasting. 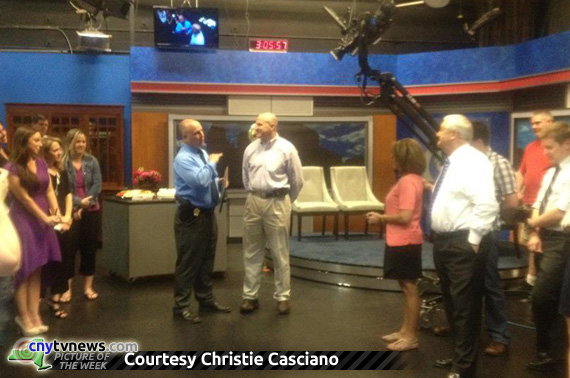 Roger Mirabito joined NewsChannel 9 (WSYR-TV, then-WIXT) in 1999 as assignment editor.  In this role, Mirabito had his finger on the proverbial pulse of Central New York, monitoring police scanners, courtroom schedules, press releases and other sources to make sure the ABC affiliate’s news crews were on top of each day’s biggest stories, changing plans when breaking news hit the fan, and maintaining files on long-running stories.

Mirabito’s last day was Wednesday; that’s him in the light-colored shirt at the center of this photo, taken by anchor Christie Casciano during a farewell ceremony in the NewsChannel 9 studio.  Next to Mirabito is Syracuse Police Department’s Tom Connellan, presenting Mirabito with a written statement thanking Roger for his years of cooperation and loyalty in helping the department get the word out about wanted criminals and other important messages.  In a video Casciano posted to Facebook, Conellan says he’s been the department’s PIO for about 12 years, and he has spoken with Mirabito at some point almost every day during that time.

Casciano tells CNYTVNews.com that similar honors were bestowed upon Mirabito by representatives from the New York State Police, the Oswego County Sheriff’s Office and University Hospital, who were all in attendance for the send-off.

Mirabito was honored with the Syracuse Press Club’s Selwyn Kershaw Professional Standards Award in 2009, and during 2011, he became the station’s interim news director, and eventually, the assistant news director.  He has accepted the position of Communications Coordinator at Onondaga Community College. 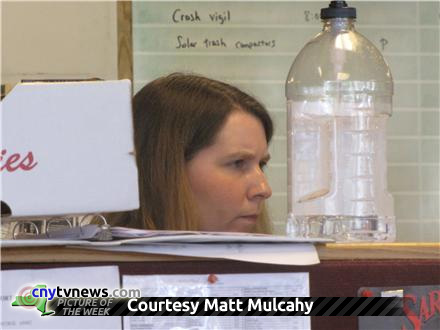 Across town, Kristy Smorol is exiting her role as producer at CNY Central (WSTM/WTVH/WSTQ-LP) after seven years in various shifts at the station.  Outside of TV news, most people don’t realize that many of the words read by the anchors were written by producers.  While the anchors for a morning show newscast usually arrive around 4:00am, it’s the producer who’s been working overnight to build the show’s rundown, organizing the story order, designing the graphics, deciding how much time will be spent on each story, and getting “into the anchor’s ears” during the broadcast, giving cues to keep the newscast on-time, or to relay information during breaking news situations.

CNY Central anchor Matt Mulcahy devoted Wednesday’s installment of his “Matt’s Memo” blog to Smorol’s departure, recalling her arrival as the station’s overnight producer right after graduating from Syracuse University.  Since then, she has moved to different shifts, ending her run as the producer of the 5:00 newscast for NBC3.  On his blog, Mulcahy offered nothing but praise:

The level of trust and esteem I hold for Kristy is matched only by the trust I have had in a handful of other producers over my 26 years in the business.  The others are all working in major markets and networks.  That’s exactly where Kristy would be too if she had not chosen to stay close to home and build her future in Syracuse.

Smorol, whose work earned CNY Central the Syracuse Press Club’s “best newscast” award two years in a row, has accepted an offer to become Communications Manager at the Syracuse office of the American Heart Association.

Congratulations to Roger and to Kristy on their new positions!

Next Friday, a “blast from the past” reader-submitted series from days gone by in Syracuse radio.  After that, the slate is empty — so if you’ve got pictures of a recent happening from your local TV or radio station… or another “blast from the past” to share, we’d love to share your photos here in a future Picture of the Week.  Send those shots to cnyradio@cnyradio.com or upload via the Contact Form.