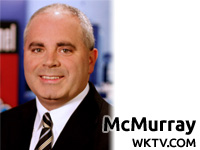 UTICA — New business cards are on the way for NewsChannel 2 (WKTV) news director Steve McMurray… today, staffers learned he is being promoted to Station Manager for the NBC affiliate.

According to an announcement from GM Steve Doerr today, McMurray “will oversee the day-to-day operations of the station while continuing to act as News Director” and co-anchor of the station’s “Live at Five Newshour.”

The title of Station Manager may seem redundant underneath a GM to those unfamiliar with the station, but we’ll note that Doerr splits his time between WKTV and Smith Media LLC’s properties in Burlington, Vermont.  Vic Vetters, who held the position prior to Doerr, also oversaw the Smith stations in both markets.

Doerr’s announcement noted McMurray’s ” experience, market knowledge, position in the community and his broad range of operational expertise” as “exactly what we need as we continue to push forward.”

McMurray is a lifelong resident of the Mohawk Valley who started his TV career in 1995 in the sports department at ABC affiliate WUTR, eventually switching over to news and becoming the station’s news director.  McMurray made the move “across the street” to WKTV in 2002 and became news director in 2004.

Outside of television, McMurray presides over the Frankfort Fire Department, where he’s been a member for 20 years.  He also serves on the board of the Frankfort Kiwanis Club, where he has previously served as president.

Thanks to an anonymous CNYTVNews.com reader who used our Contact Form to provide the tip that allowed us to verify this story!  Anytime there’s news happening inside your station, feel free to use that same form (where your name and email address are optional) or you can email cnyradio@cnyradio.com.  Either way, if you’d rather remain anonymous, just let us know.