SYRACUSE — You might say they’re a motley crew, even though you probably won’t hear them playing any Motley Crue.  Four WSEN-FM personalities recently posed for this photo at a gradation party for the daughter of afternoon host John Carucci. 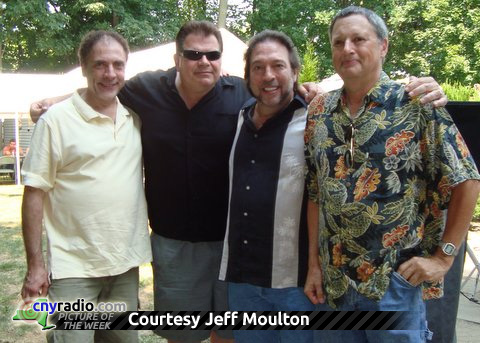 That’s Carucci at left, next to morning man Gary Dunes, midday host Bob Brown, and weekender Jeff Moulton, who provided the photo.  Congratulations to John’s daughter Mackenzie on her graduation!

You may not have been keeping track, but we have — this is the 4th week in a row we’ve featured a reader-submitted Picture of the Week!  It’s a new record, at least since your editor took over the site in 2008.  Let’s keep the streak going!  If it’s been a long time since we’ve featured anything from your station — or even your market in general — here’s your chance to “jump in.”  Whether you have recent photos from your local radio or TV station, or a notable “blast from the past” featuring people, equipment or studios from days gone by — just send them to cnyradio@cnyradio.com or upload via the Contact Form.