UTICA-ROME — Going back nearly 75 years, if this is not the oldest “blast from the past” to join our Picture of the Week collection, it’s certainly got to be pretty close!  Even if you weren’t around to hear these guys on Utica’s WIBX back then, there’s a good chance you’ve seen and/or heard one man from this photo who later found decades of success in Hollywood. 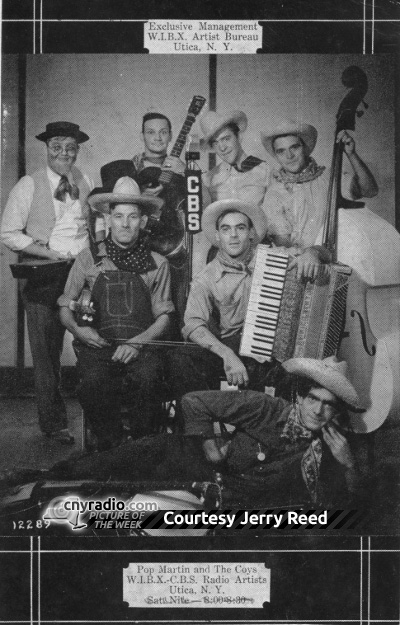 At the bottom, it says the band could be heard on WIBX every Saturday night from 8:00 to 8:30, but that part is crossed out.  Reed tells CNYRadio.com, the reverse side of this postcard has a handwritten invitation to “Tune in 8:30 to 9:00 Monday evenings,” signed by “Pop” Martin himself.  The back of the card is also dated — September 14, 1938 — and credits Lysle A. Jones of Utica as the photographer.

From WIBX to Hollywood, via World War II

Reed points out, the man on the far left, “with the vest, glasses and funny hat is none other than Hal Smith.”  After graduating from Massena High School in 1936, Smith was hired at WIBX as a disc jockey and voice talent.  In 1943, Smith left to serve his country in World War II.  After returning to the States, he headed for Hollywood.

Television fans of the 1960s might say Smith was best-known for playing Otis Campbell, the town drunk on The Andy Griffith Show.  The character was famous for stumbling into the police station and locking himself into a holding cell, much to the chagrin of Deputy Barney Fife, played by Don Knotts.  Smith also did plenty of voiceover work that was held through the 60s and for decades beyond — Jerry Reed lists some of Smith’s roles for us:

He was the Elmer Fudd stand-in for Mel Blanc and played the role on the Bugs Bunny and Road Runner Hour, “Cosmo Creeps” on Scooby Doo,  the Owl on Winnie the Pooh and thousands of other voices and well as as many TV and radio commercials during his lifetime.

According to Smth’s Wikipedia page, he also voiced Fred Flintstone’s rich uncle Tex.  If we’re still reaching back too far, here’s one children of the 80s and 90s might remember — Smith provided the voice of Scrooge McDuck’s archrival, Flintheart Glomgold, on the popular Disney TV series, DuckTales.  Smith was also the voice for Phillipe the Horse in Disney’s 1991 animated feature film, Beauty and the Beast.  Sadly, Smith died of a heart attack in 1994, at the age of 77.  He was predeceased by his wife in 1992, and their only son died in 1998.

Great find by Jerry Reed!  Check out his website at jerryreed.com… and if you happen to know the story behind anyone else in the above photo, feel free to share by posting a comment below.

We love having the chance to share gems of local broadcasting history like these — and of course, there’s always room for photos of the latest and greatest happenings too!  It’s all thanks to readers like Jerry Reed, who sent in this photo, that we’re able to bring you another “Picture of the Week” (or the occasional “Video of the Week”) every Friday at 7:00am.  If you’ve got an item to share, we’d love to hear from you at cnyradio@cnyradio.com or you can upload files through our Contact Form.