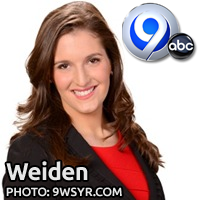 SYRACUSE — Even though Chris Brandolino announced his plans to leave NewsChannel 9 (WSYR-TV) last month, one of his colleagues from the Storm Team has a surprise: she’s going to beat him to the door by a couple of days.  Weekend meteorologist Julia Weiden’s last day on-air with the ABC affiliate will be Sunday, December 29.

Thanks to a CNYTVNews.com reader who wrote in to tell us Weiden announced her upcoming departure on Facebook.  Because the post our reader cited was not visible to the general public, we checked with WSYR-TV News Director Rob Cartwright, who confirmed Weiden’s departure.

Update 1/8/14 — NewsChannel 9 has named a replacement for Weiden’s weekend newscasts.

In addition to appearing on WSYR-TV’s morning and evening weekend newscasts, Weiden has frequently guest-hosted on Bridge Street, the station’s mid-morning talk show, especially while co-host Caroline Gable has been out on maternity leave.  A certified personal trainer, the Cornell University grad also hosted a regular fitness segment on the show, and has taught kickboxing classes at Syracuse University, according to her bio on 9WSYR.com.

According to our tipster, Weiden is leaving for a new job in the southeastern U.S.  She’ll be working in a television market slightly smaller than Syracuse, but she’ll be on the air weekday mornings, an upgrade (and we imagine, a more stable schedule) compared to covering all of the weekend newscasts — at 7am, 6pm and 11pm — at channel 9.

One week ago, Cartwright announced former chief meteorologist Dave Eichorn will return to channel 9 in 2014.  Tonight, Cartwright says Eichorn’s schedule is still being worked out, but he confirms Eichorn will not be assuming Weiden’s weekend shifts.  The Nexstar-owned station will hire a new weekend meteorologist.

Last month, current morning meteorologist Chris Brandolino announced his last day at channel 9 will be December 31.  Citing a need for a better “life-work balance,” Brandolino and his family are moving to New Zealand, where he’ll be accepting a job with that nation’s weather forecasting agency.  He said the more-traditional hours at the new job will allow him to spend more time with his family.

Previously, Cartwright said noon meteorologist Jim Teske would add The Morning News to his duties after Brandolino leaves.  He also said Dave Longley, who became chief meteorologist after Eichorn left the station in 2008, will retain the title.

Oh, and one more thing…

Notice anyone missing from the NewsChannel 9 talent bio page?  We’ve heard through the grapevine that morning traffic reporter and Bridge Street co-host Caroline Gable enjoys her new role as a mother so much, she has decided not to return from maternity leave.  Her decision — and the upcoming departure of co-host Brandolino — leaves us wondering who will wind up hosting the show in the long run.

We wish Julia and Caroline all the best with their future plans.